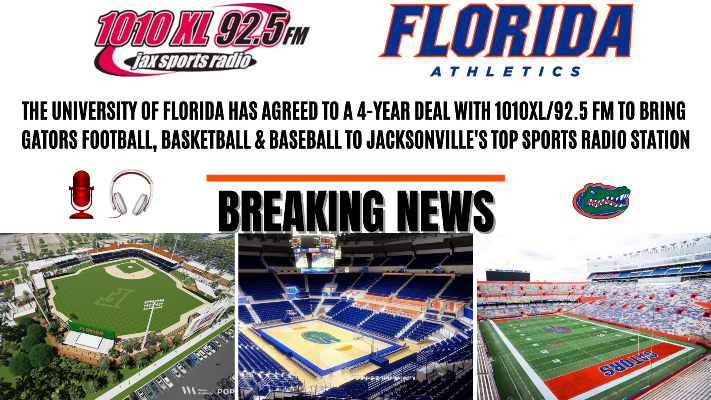 The University of Florida has found a new radio home on the First Coast, joining the Jacksonville Jaguars on the city’s top sports station.

1010XL/92.5 FM, the flagship station of the Jaguars, is now home for Gators athletics as well. The partnership goes into effective this week, starting with the airing of Gator baseball games and the two-hour Florida football spring special. The partnership was announced jointly this week by the University Athletic Association, Florida Gators Sports Properties and 1010XL. The Jacksonville sports radio station made it official on the air with Dan Hicken and Jeff Prosser sharing the news at 9am this morning, and following up the announcement with a special radio appearance by legendary Gators football coach Steve Spurrier.

The four-year deal makes 1010XL/92.5 FM the home for all Gators football and men’s basketball games, as well as conference and other selected baseball games, plus all Gators talk shows.

“We are excited to partner with 1010XL to bring Gator athletics to the First Coast airwaves,” said Florida Athletics Director Scott Stricklin. “We have a large passionate fan base in the listening area who can now follow all of our football, basketball and conference baseball games on the premier sports talk radio station in Jacksonville.”

1010XL/92.5 FM has been the flagship station of the Jaguars since 2014. Launched in 2007, the station has committed to live and local programming, featuring some of the most popular and longest running sports talk shows in Jacksonville. In addition to adding the Gators and remaining the home of the Jaguars, the radio station will continue to be the radio home for Jacksonville University athletics, and other professional, college and high school sporting events.

“We are thrilled to add University of Florida athletics to our all-star play-by-play lineup,” 1010XL/92.5 FM President and General Manager Steven Griffin said. “As the proud flagship station of the Jaguars, it only made sense to add the Gators, whose heritage and incredible following in our area and statewide is second to none among college programs.”

Mets Expect Howie Rose Back on Radio This Week

Sean Levine Out at 610 Sports In Kansas City

WFAN’s Marc Malusis wants Stephen A. Smith to acknowledge that he either has inside information regarding the Nets or that he completely made up a trade rumor on First Take earlier this week. Smith said on First Take that the Brooklyn Nets would trade Kyrie Irving to Philadelphia if it meant they got Ben Simmons back in return, but the idea has been nixed by Kevin Durant.

Stephen A. Smith accused some in the media of lying about his report. He tried to claim that he what said on First Take was that the Irving for Simmons deal is a trade the Nets could do. That was enough to sett Malusis off.

“This is just complete and utter BS,” he shouted. “I mean, get the boots on!”

Marc Malusis claims that the idea of an Irving for Simmons trade isn’t totally absurd. Having James Harden on the roster would allow Brooklyn to bring in someone that does everything well but shoot. Still, he says Smith framed his stance as something he knows happened and Malusis is adamant it didn’t.

He was even more upset that Smith would say people in the New York media “lied” about what Smith had said. Marc Malusis pointed out that when you are the local media, you have to dive into a rumor like that. It doesn’t just get to be something that was said on ESPN.

It sounds like Malusis’s greatest objection is to Smith’s indignation at the idea that someone took his trade rumor seriously.

“Don’t all the sudden start waking back and saying ‘everyone’s spewing lies about what I had to say yesterday’ because you know what? We had to weed through the BS of what you said yesterday.”

”It’s been tough on these kids, and this will definitely help us.”

During the phone interview, Callais informed listeners of the impact that Ida had on their school, including major damages to the high school that there are no funds to repair. Additionally, the school’s sports teams will be forced to travel for every game this season as their facilities are not fit to host other schools.

Little did Callais know, Matt Moscona had invited the founder of a Baton-Rouge-based cryptocurrency business called Game Coin to join him in the 104.5 ESPN studio to surprise Callias with a donation of $100,000 dollars to the school.

“This will go a long way,” said Callais after learning of Game Coin’s donation to his program. “Our [senior] student-athletes have not had a normal high school year since their freshman year…Their sophomore year, they were hit with the pandemic, and we’re looking forward to a regular senior year for them. It’s been tough on these kids, and this will definitely help us.”

Gamecoin is one of the few cryptocurrencies that is not totally for profit, as 4% of their 10% transaction fee goes to charitable donations to help youth sports groups.

“Growing up, I didn’t have everything that I thought I should have,” said founder of Game Coin David Mahler on Moscona’s radio program. “I just always wanted to be able to provide for people…and since I’m able to do that now, I added that as a part of Game Coin.”

Mahler also said in the interview that three more similar donations are already arranged and they will be announced within the next two weeks.