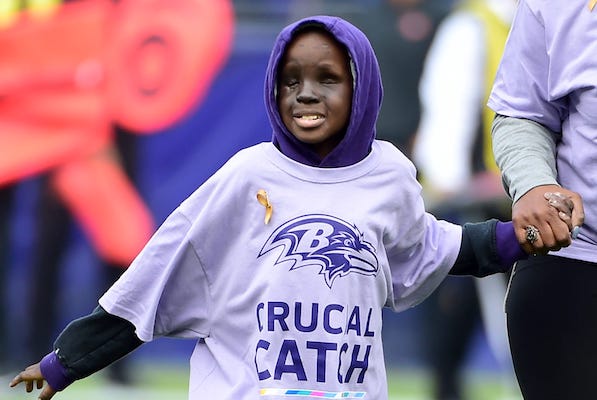 Next Tuesday, Jan. 26 would have been the late Mo Gaba’s 15th birthday, and to honor him, Jeremy Conn of 105.7 The Fan will dedicate his evening radio show to the Baltimore icon.

“Tune in for 3 hours of love and positivity,” Conn, who hosts weeknights from 6 – 9pm wrote on Twitter.

Despite passing away last year, Gaba’s legacy and positivity lives on as he continues to inspire people who marvel at his spirit.

Known as Little Mo, Gaba was in the middle of his fourth bout with cancer this past summer. Having lost his vision at just nine months old, it’s estimated that Little Mo spent 75% of his life in the hospital. Through his impressive spirit and personality, Gaba built strong relationships with the Ravens, Orioles and 105.7 The Fan, especially Conn.

A few weeks before he died, Conn turned his normal 6 – 9pm timeslot into The Big Mo Show. Conn went to Gaba’s house for a remote broadcast from his bedroom, where the duo put their heartwarming friendship on display. Conn and Gaba stayed on-air for nearly five hours with phone lines full of celebrities and callers who each wanted the chance to express appreciation for the inspiring 14-year-old.

Conn’s dedication to Gaba next Tuesday will feature segments and returning guests from The Big Mo Show as they celebrate his birthday.

WFAN’s Marc Malusis wants Stephen A. Smith to acknowledge that he either has inside information regarding the Nets or that he completely made up a trade rumor on First Take earlier this week. Smith said on First Take that the Brooklyn Nets would trade Kyrie Irving to Philadelphia if it meant they got Ben Simmons back in return, but the idea has been nixed by Kevin Durant.

Stephen A. Smith accused some in the media of lying about his report. He tried to claim that he what said on First Take was that the Irving for Simmons deal is a trade the Nets could do. That was enough to sett Malusis off.

“This is just complete and utter BS,” he shouted. “I mean, get the boots on!”

Marc Malusis claims that the idea of an Irving for Simmons trade isn’t totally absurd. Having James Harden on the roster would allow Brooklyn to bring in someone that does everything well but shoot. Still, he says Smith framed his stance as something he knows happened and Malusis is adamant it didn’t.

He was even more upset that Smith would say people in the New York media “lied” about what Smith had said. Marc Malusis pointed out that when you are the local media, you have to dive into a rumor like that. It doesn’t just get to be something that was said on ESPN.

It sounds like Malusis’s greatest objection is to Smith’s indignation at the idea that someone took his trade rumor seriously.

“Don’t all the sudden start waking back and saying ‘everyone’s spewing lies about what I had to say yesterday’ because you know what? We had to weed through the BS of what you said yesterday.”

”It’s been tough on these kids, and this will definitely help us.”

During the phone interview, Callais informed listeners of the impact that Ida had on their school, including major damages to the high school that there are no funds to repair. Additionally, the school’s sports teams will be forced to travel for every game this season as their facilities are not fit to host other schools.

Little did Callais know, Matt Moscona had invited the founder of a Baton-Rouge-based cryptocurrency business called Game Coin to join him in the 104.5 ESPN studio to surprise Callias with a donation of $100,000 dollars to the school.

“This will go a long way,” said Callais after learning of Game Coin’s donation to his program. “Our [senior] student-athletes have not had a normal high school year since their freshman year…Their sophomore year, they were hit with the pandemic, and we’re looking forward to a regular senior year for them. It’s been tough on these kids, and this will definitely help us.”

Gamecoin is one of the few cryptocurrencies that is not totally for profit, as 4% of their 10% transaction fee goes to charitable donations to help youth sports groups.

“Growing up, I didn’t have everything that I thought I should have,” said founder of Game Coin David Mahler on Moscona’s radio program. “I just always wanted to be able to provide for people…and since I’m able to do that now, I added that as a part of Game Coin.”

Mahler also said in the interview that three more similar donations are already arranged and they will be announced within the next two weeks.